Tell-Tale Signs of Eating Disorders You Should Know

Home » Tell-Tale Signs of Eating Disorders You Should Know

More than 20 million women and 10 million men in American alone have an eating disorder, ranging from anorexia nervosa, bulimia, binge eating to other more uncommon conditions. This medical condition can affect people of any age and body type, and when left untreated, can be dangerous and lead to fatal consequences.

Depending on their nature, eating disorders may lead to malnutrition, dehydration, and other health issues like obesity, arrhythmia, and hypothermia—and among all mental disorders, eating disorders have the highest death tolls. That’s why early intervention is crucial.

If you suspect your loved one suffers from an eating disorder, take action as soon as you recognize the following telltale signs and seek professional treatment at a local addiction treatment center.

Individuals who aren’t getting enough food intake usually experience an anxious mood and are likely to withdraw socially. They may even show depressive tendencies. Isolation and depression are some of the most significant signs of eating disorders. A person may withdraw from their closest friends and favorite activities, especially when it involves food. If you notice a loved one getting moody after eating, they may have an eating disorder. Additionally, they may feel disgusted with themselves or overly guilty after overeating, leading to further isolation and depression.

Food rituals are a common telltale sign of eating disorders, in which a person may do something too far. For instance, they may only eat one category of food, like condiments only or spinach. They may also excessively chew their food or cut them into smaller pieces. Others may arrange their foods to create an appearance of having eaten when minimal to no food was consumed in reality.

Individuals with eating disorders may also restrict foods in excess and consider some foods to be off-limits. You’ll even notice that they frequently preoccupy themselves by writing down each food’s calorie content and other nutritional factors, including carbohydrates, sodium, and fat. Eating disorders are issues with being overly controlling rather than the food itself. So, if you notice your loved ones being extreme with their diet restrictions, seek professional help immediately.

Limited eating, overeating, and not eating at all may have severe effects on the body. Any eating disorder can bring an array of physical symptoms, and each person will show the signs differently. However, the most common ones include low blood pressure, dizziness, dry skin and hair, hair loss, rapid weight loss, insomnia, and halted menstrual cycles.

One of the most prominent telltale signs of an eating disorder is excessive body insecurity and low self-esteem. A person with an eating disorder will naturally have negative or obsessive thoughts about how they look, from their body size to shape. They tend to be sensitive overall about their body image. So, if you notice a loved one consistently persisting or complaining about their concerns for being fat or the need to lose weight, they may have an eating disorder.

Fear of Eating in Public

Feeling self-conscious or even fearful about eating in public can be strongly related to body image issues—and a person may feel like others are watching and judging them for eating. However, it may also indicate that eating in itself has become nerve-wracking. That’s because eating can be extremely anxiety-provoking for individuals suffering from an eating disorder, and doing it in a public setting worsens it.

Although refusing to eat out or around other individuals is a hallmark of anorexia nervosa, it can happen with most eating disorders. 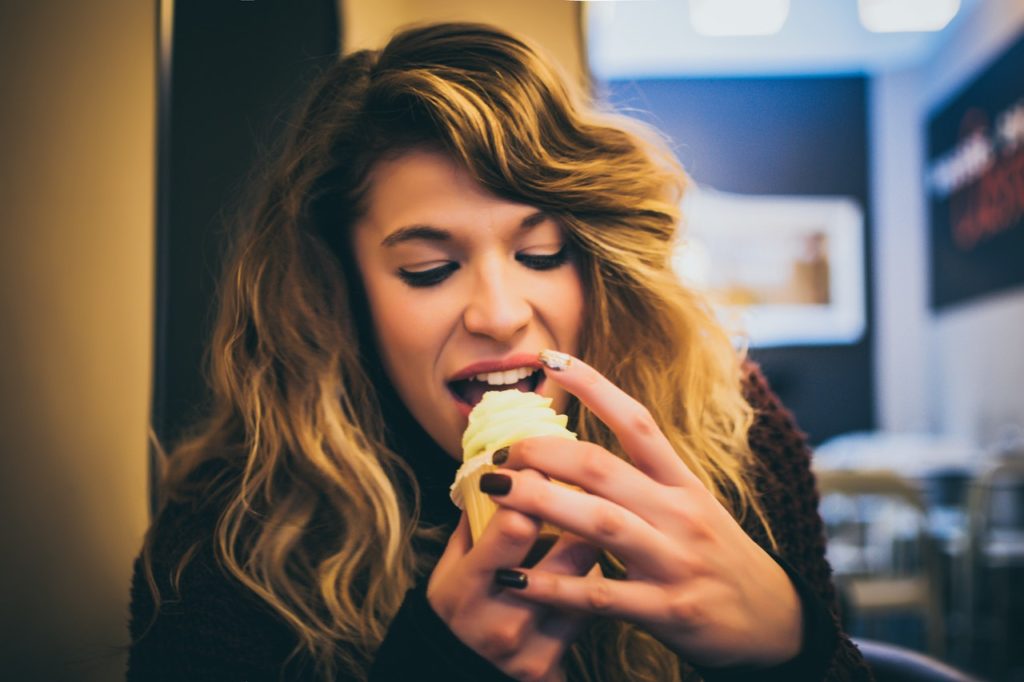 Individuals who have deprived their bodies of nutrition for a prolonged period naturally develop soft and thin hair, resembling thin pieces of film on their arms and other body parts. This medical condition, known as ‘lanugo,’ is a physical adaptation of the body to the perilously low weight and loss of body fat seen in some individuals suffering from anorexia or bulimia.

Generally, it’s a symptom of starvation and an attempt of the body to keep itself warm and alive.

Keep in mind that the signs of a particular eating disorder vary on what type of eating disorder exists—but the ones mentioned are common ground amongst them all. However, it’s best to still consult with a professional if you think you or a loved one has an eating disorder. After all, though eating disorders are complicated, they’re treatable.